As a triathlon coach and a keen athlete, I never shy away from setting goals and training hard to achieve them — indeed, my motto in business and in life is ‘believe to achieve’.

Even so, I admit there were moments after I decided I was going to set a new Guinness world record when I did wonder whether I’d bitten off slightly more than than I could chew…

My twins Hannah and Freya were born in November 2015, and once they were past the baby stage I began by looking for a sporting challenge I could take on with them in tow. My husband Ian and I also have a son, Max, who is three this summer, so between our family and our coaching and sports events business, we definitely have our hands full.

I therefore began by looking for a goal that would keep me off the sofa, that I could fit in around the rest of my life without too much juggling, that was tough but not unrealistic — and that’s when the idea of breaking a record of some sort came to me, and I started exploring the Guinness World Records website. 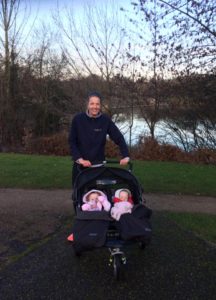 And there was my challenge: breaking the women’s record for running a half-marathon while pushing a double pram. It stood at 1 hour 49 minutes and 23 seconds, and I was confident I could beat that comfortably.

I’m 32 and I’ve run several half-marathons over the years, so the distance was never the issue: it was whether I could maintain a fast enough pace while pushing the girls and — just as important — whether the girls would be happy to stay strapped in for more than an hour and a half.

There was only one way to find out, and fully focused on breaking this world record, I went to work. I identified the F3 Events Windsor & Eton Half Marathon on 18 March 2017 as my target race and set myself a nine-week training schedule that fitted in around Max and business…

When I started my training plan, I was only just back from several months out of running with a foot injury, so we took it very gently. That first run was just 1.5 miles, and I slowly increased the mileage week by week with a final training run of 11.5 miles two weeks before race day.

The girls were generally pretty laid back about their mother’s crazy plan. We had a few issues around too few snacks and not enough layers of clothing on a couple of runs, but we always got back to our home in Bracknell, Berkshire, without serious incident.

I found that keeping the girls well stocked with snacks was the key to a trouble-free run, and began giving them an apple each. Nibbling away kept them occupied for ages, as did pouches of pureed food they could manage themselves — but that did mean a lot of cleaning up at the end! I meantime snacked on jelly babies. 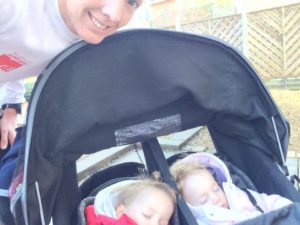 Before I knew it, I was on final countdown to the race. I’d chosen this particular event for a reason: it’s held at Dorney Lake — where the 2012 London Olympics rowing took place — and the four-lap course around the lake is almost completely flat, something that matters a very great deal when you’re pushing a double buggy for 13.1 miles!

On race day, the girls — by now 16 months old — weighed in at around 20kg between them and the buggy another 13kg, so I was steering a total of 33kg. Running up and over a small bridge four times was the absolute maximum I wanted to do by way of hills on this record attempt.

Now Dorney may be flat but it also has a reputation — some might say notoriety — for being windy, and unfortunately 18 March was not one of its kinder days. In fact, it was ridiculously windy… 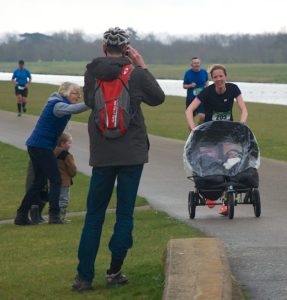 The day had already got off to an inauspicious start because Hannah had been unwell the night before and I wasn’t sure how she would manage. In the event, she slept from beginning to end and Freya was as good as gold sat next to her with a generous supply of snacks.

Which was just as well because it was hard going. Really hard going. I put the rain cover over the buggy to protect the girls from the wind, which it did, but it also acted as a sail and made what was already shaping up to be a super-tough race even tougher. 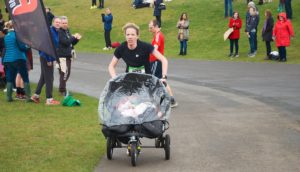 Very quickly it became clear that despite all my hard work in training and a highly realistic projected finishing time that would have taken 10 minutes off the existing world record, I was in grave danger of seeing my bid scuppered by the Dorney wind.

It was touch and go, right up until the end, but we crossed the line in a triumphant 1 hour 47 minutes and 33 seconds — and took the world record! 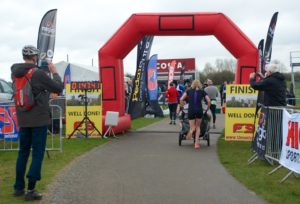 It may have been by less than two minutes and much tighter than I’d planned, but a world record is a world record, and I’m very proud to now be in there among all the sporting greats.

Am I going to try to better my time? Hmmm… Can I come back to you on that? 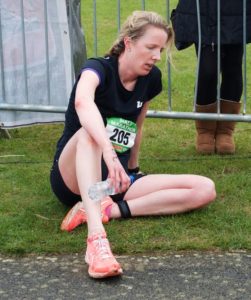 ​Want to be the first to know what's going on?​